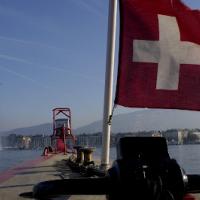 Symposium on ‘Diplomatic and Judicial Means of Dispute Settlement: Can They Get Along?’
Geneva, 23 October 2010
On the 23 October 2010, a symposium was held on the topic “Diplomatic and Judicial Means of Dispute Settlement: Can They Get Along?”. This was the first event organised jointly by three societies of international law, namely the American Society of International Law, the European Society of International Law and the Latin American Society of International law, with the Faculty of Law at the University of Geneva and the Graduate Institute of International and Development Studies.
The Symposium brought together many experts, academics and practitioners. This facilitated a comprehensive illumination of the varied and diverse interactions that take place between judicial or arbitral means and diplomatic or political means of dispute settlement.
Organised into three panels, the Symposium addressed topics in a chronological fashion. The first panel focused on the “beginning of a procedure for settling disputes”. This gave an opportunity to address such issues the conduct of negotiations prior to proceedings before the International Court of Justice (ICJ), the relationship between the Security Council and the International Criminal Court or, for instance, where tensions rise as a result of the issuance of an arrest warrant during negotiations. The second panel explored the links between legal and diplomatic means following the initiation of legal proceedings, whether at the ICJ, the World Trade Organisation, in arbitration proceedings or other alternative means of dispute settlement. The third panel focused on the implementation of decisions and opinions of the ICJ, court judgments in the field of human rights, the decisions and recommendations of the World Trade Organisation and the enforcement of arbitral awards in investment disputes.
The Symposium concluded with a round table which brought together these issues in the context of the relationship between judicial and diplomatic means of dispute settlement, drawing upon the experiences and reflections of the attendees.
Through an interview conducted by Professor Nicolas Michel, the former United Nations Secretary General, Kofi Annan, shared his experience with participants at the Symposium, especially in respect of the decision handed down by the ICJ in the Case Concerning Cameroon/Nigeria and the crisis in Kenya.