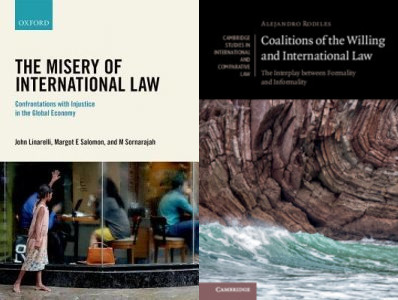 The 2019 European Society of International Law Book Prize jury unanimously decided to award the 2019 prize ex equo to John Linarelli, Margot E. Salomon and Muthucumaraswamy Sornarajah for The Misery of International Law: Confrontations with Injustice in the Global Economy, Oxford University Press, and Alejandro Rodiles for Coalitions of the Willing and International Law: The Interplay between Formality and Informality, Cambridge University Press.
The ESIL Book Prize jury evaluated a wide range of books published in 2018 submitted for consideration by leading international law publishers. The jury members for this year’s Prize were Enzo Cannizzaro (Sapienza University, Rome),  Carlos Esposito (University of Madrid) and Evelyne Lagrange (University of Paris 1, Panthéon-Sorbonne).
The jury explained their decision as follows:
A number of reasons accounted for this award: excellent methodology, analytical accuracy, quality of writing and originality of their conclusions. At first sight, the books have little in common. Linarelli, Salomon and Sornarajah strive to demonstrate how deceptive international law could be, producing immiseration rather than global justice, and that it can but perpetuate ‘capitalist structures’ and provide for thin corrective measures only. Rodiles strives to unravel coalitions of the willing – mostly the most powerful ones – built for the achievement of common goals without formal commitments and outside institutional frameworks. A global adamant critic of international law as it has always been, on the one hand; a nuanced approach to informal, but still formalizable cooperation based on burden-sharing among able and willing states, on the other hand. A strong, all-embracing critic versus an ingenious account of sectorial practices enriched with moderate critic. Nevertheless, both books have in common the ambition to overpass the limits of positive international law arguments and to frame their analysis in a wider context which includes philosophy, theory of justice and economics (in Linarelli, Salomon and Sornarajah) and sociology and theory of language (in Rodiles), thus reinvigorating classical normative analysis with arguments pertaining to other social sciences. Even more importantly, both books highlight, albeit in different ways, some quite neglected features of international law: the (co-)existence of spheres of normativity corresponding to divergent or conflicting logics, hardly consistent with a universalist perspective; the secret and almost invisible ways through which the power is exercised, bypassing legitimate institutions or organised groups of interest, and ultimately heavily weighting on the daily life of individuals, at a time of globalization without global instances of justice. None of the two books can be said to unveil the ultimate truth on what international law really is or will be. Both provide, however, for vivid pictures of international law and its underlying social realities, sometimes obfuscated by purely technical legal analyses. In a nutshell, and borrowing an expression from one of the authors, both books prompt reflections on “the old dream of international law as a universal project”.
The ESIL Annual Conference in Athens in September 2019 included a conversation with some of the authors about the prize-winning books, and the awards were presented during the conference dinner.