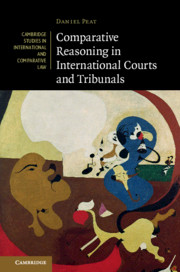 The jury evaluated a wide range (13 in total, on very different topics) of books published in 2019 submitted for consideration by leading international law publishers.

The jury regrets that, while books can be submitted to the ESIL Book Prize in any European Language, only books in English were submitted. Given the nature of the ESIL, the jury paid close attention to the criteria of multilingualism with regard to the bibliographical sources of the books. The jury also favoured monographs above text books.

Each of the members of the jury read the 13 books and then collectively discussed the merits of each of them. The jury members were in agreement that four of the books in particular were strong contenders for the ESIL prize. Following deliberation, the jury decided to award the Prize to Daniel Peat’s Comparative Reasoning in International Courts and Tribunals (CUP, 2019).

The book examines the practice of five international courts and tribunals (in different fields of international law: ICJ, WTO, Investment Arbitration, ECHR, ICTY) to demonstrate that domestic law is invoked to interpret international law in a way that is not necessarily foreseen by existing international rules of interpretation. Peat’s book main virtue is that it draws new conclusions which are discovered behind well-known general issues. Practical examples used are of great relevance – even if the methodology that is followed, in particular in the selection of the said examples, could have been more clearly presented.

The prize was announced during the 2020 ESIL General Assembly. A virtual celebration with the author was held on 2 October  2020. A video recording of the event is available here.