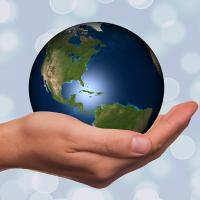 ‘We can’t solve problems by using the same kind of thinking we used when we created them.’
Albert Einstein

[t]he human enterprise switched gears after World War II. Although the imprint of human activity on the global environment was, by the mid-twentieth century, clearly discernible beyond the pattern of Holocene vulnerability in several important ways, the rate at which that imprint was growing increased sharply at mid-century. The change was so dramatic that the 1945 to 2000+ period has been called the Great Acceleration.


[1]Also see Davor Vidas, “The Earth in the Anthropocene – and the World in the Holocene?” (2015) 4(6) ESIL Reflection.
[2] The Working Group on the Anthropocene of the International Commission on Stratigraphy http://quaternary.stratigraphy.org/workinggroups/anthropocene/, accessed 03/11/16.
[3] The Holocene denotes a geological era starting about 11.700 years ago which is related to a period of global warming and glacial retreat (http://quaternary.stratigraphy.org/majordivisions, accessed 03/11/2016) and which facilitated the development of human society (Jan Zalasiewicz, Mark Williams, Alan Haywood & Michael Ellis, “The Anthropocene: a new epoch of geological time?” (2011) 369  Philosophical Transactions of the Royal Society, 835, 836).
[4] The production of nitrogen based fertilizer involves large amounts of fossil fuel in its production process by way of the so-called Haber-Bosch process.
[5] See press release at http://www2.le.ac.uk/offices/press/press-releases/2016/august/media-note-anthropocene-working-group-awg, accessed 03/11/2016. Note that the text of the report presented in South Africa was not available at the time of writing.
[6] Will Steffen, Jaques Grinevald, Paul Crutzen & John McNiel, “The Anthropocene: conceptual and historical perspectives” (2011) 369 Philosophical Transactions of the Royal Society 842,  849. Note that the authors are members of the Working Group on the Anthropocene.
[7] Jan Zalasiewicz, Colin N. Waters, Mark Williams, Anthony D. Barnosky et al., “When did the Anthropocene begin? A mid-twentieth century boundary level is stratigraphically optimal” (2015) 383 Quaternary International 196. Note that all 26 authors are members of the Working Group on the Anthropocene, which counts 38 members.
[8] WTO website https://www.wto.org/english/thewto_e/whatis_e/tif_e/fact4_e.htm, accessed 03/11/2016.
[9] World Bank website http://www.worldbank.org/en/about/archives/history, accessed 03/11/2016.
[10] IMF website https://www.imf.org/external/about/histcoop.htm, accessed 03/11/2016.
[11]  http://investmentpolicyhub.unctad.org/IIA, accessed 03/11/2016.
[12] International Center for Trade and Sustainable Development, “Environmental goods agreement negotiators agree roadmap for conclusion”, 4 August 2015, available at http://www.ictsd.org/bridges-news/biores/news/environmental-goods-agreement-negotiators-agree-roadmap-for-conclusion, accessed 03/11/2016.
[13] See http://web.worldbank.org/WBSITE/EXTERNAL/PROJECTS/EXTPOLICIES/EXTSAFEPOL/0,,menuPK:584441~pagePK:64168427~piPK:64168435~theSitePK:584435,00.html, accessed 03/11/2016.
[14] See http://www.imf.org/external/np/fad/environ/index.htm, accessed 03/11/2016.
[15] Press release, “UN experts voice concern over adverse impact of free trade and investment agreements on human rights”, 20 June 2015, available at http://www.ohchr.org/EN/NewsEvents/Pages/DisplayNews.aspx?NewsID=16031, accessed 03/11/2016.
[16] See contributions to Clive Hamilton, Christophe Bonneuil and François Gemenne (eds), The Anthropocene and the Global Environmental Crisis (Routledge 2015).
[17] On greenhouse gas accounting see Steven J. Davis & Ken Caldeira, “Consumption-based Accounting of CO2 Emissions” (2010) 107(12) PNAS, available at http://www.pnas.org/content/107/12/5687, accessed 03/11/2016.
[18] For information see https://cdm.unfccc.int/, accessed 03/11/ 2016.
[19] E.g. the 2000 Cartagena Protocol to the Convention on Biodiversity, and the 1998 Rotterdam Convention on the Prior Informed Consent Procedure for Certain Hazardous Chemicals and Pesticides in International Trade.
[20] Art 3(2), WTO, Understanding on Rules and Procedures Governing the Settlement of Disputes.
This website uses cookies to improve your experience. We'll assume you're ok with this, but you can opt-out if you wish. Cookie settingsACCEPT
Privacy & Cookies Policy