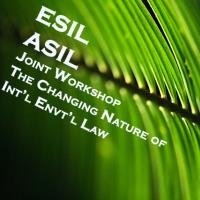 The Changing Nature of International Environmental Law: Evolving Approaches of the United States and the European Union

Publication
We believe that publishers will be interested in publishing the proceedings of the Symposium in an edited volume. The organizers reserve the right to publish the selected papers. Before publication, all papers will be submitted to peer-review.
Inquiries  For all inquiries, please contact Alejandra Torres Camprubi (atorrescamprubi@yahoo.es) and Timo Koivurova (timo.koivurova@ulapland.fi).